Dirty Dubsters Team up with UK's Natural born Spittah MC MYSTRO for the first single off their debut album also titled 'Fire it up' and fire it up they do as Mystro waxes Lyrical on a tongue in cheek 'Free the Weed' vibe to bring you 2013's first Ganja tune. Here's the official Video shot in Dublin recently as we see Mystro and Saxman Anton cosy up to Both the Garda and Enda Kenny no less, resulting in a Hazy smoke filled day in Dublin which culminates in a party that was held in the Twisted Pepper last Month with Dirty Dubsters &amp; Irish moss Records.

On Behalf of Irish Moss Records and Dirty Dubsters we'd like to thanks Barry Reid @ Gorilla Post Production for the Mix/Mastering (www.gorillapost.ie) Brian Moore for Producing/Directing the Video, Eoin Cregan and everyone that came down to the Show in the Twisted Pepper. 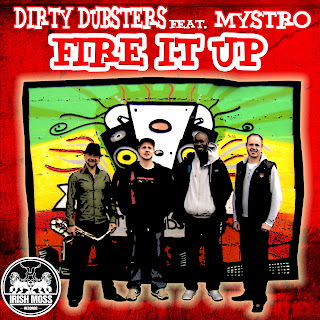 Big Respect To Dublin based artist DRIVE (http://www.flickr.com/photos/drive_createordie/) for the wicked Graffiti Piece which stood tall behind the Bernard Shaw for all of a week or two:) Shouts to Jinx in Dub, Spenda C and Fog for their big remixes which will be available Jan 21st on Irish Moss Records - Digitally (Juno, Itunes ect.)